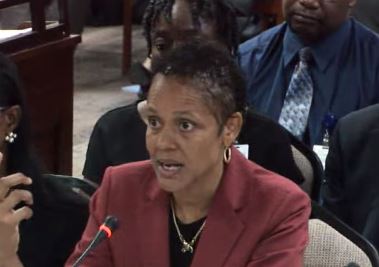 Likely Last year for 11 plus exam

Minister of Education Santia Bradshaw has declared that this year will be likely the last for the Barbados Secondary School’s Entrance Exam, also called the eleven plus or common entrance, to be replaced by a new system the details of which are currently being worked out.

The Minister was speaking as debate commenced in the House of Assembly on the government’s estimates of revenue and expenditure, with the House sitting at its new temporary location at the Worthing Corporate Centre, Worthing Christ Church. This is due to environmental issues at the parliament building in Bridgetown.

Miss Bradshaw noted that an overhaul of the education system was taking place that included a shake-up in the administration at the ministry that saw the former chief education officer Karen Best reassigned.

The education minister, flanked in what’s called the well of parliament by a number of the top officials of the ministry, including the new acting chief Joy Adamson, restated government’s intention to abolish the eleven plus exam which she felt was part of an outmoded post-slavery education, that needed to be replaced. She hinted zoning would be part of the new approach.

Miss Bradshaw says national consultations will continue but the intention is for the exam to be phased out this year.