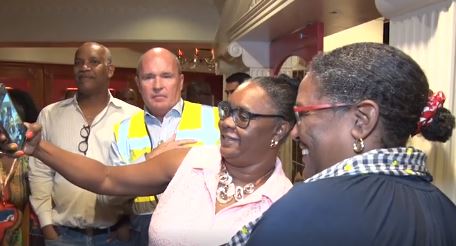 The thirty-seven Barbadians who were on board the cruise ship Carnival Fascination disembarked at the Bridgetown Port this morning, praising the Barbados government for its handling of the matter after a flu scare caused their pleasure trip to be curtailed. They described it as a scary situation.

Late last night Barbados’ Prime Minister Mia Amor Mottley, along with the ministers of Tourism and Maritime Affairs as well as the Chief Medical Officer and other officials boarded the ship to tell the more than 2,200 passengers and almost nine hundred crew in person that they had the all-clear.

The captain then used the ship’s public address system to make the announcement from the bridge of the vessel.

Ms. Mottley had earlier addressed the Barbadian passengers separately in the ship’s lounge, telling them the Barbados government tried to deal with the matter systematically. She also warned people against spreading panic.

This morning speaking to our Kezia Inniss at the Bridgetown Port, the Barbadian passengers said they were in good spirits.